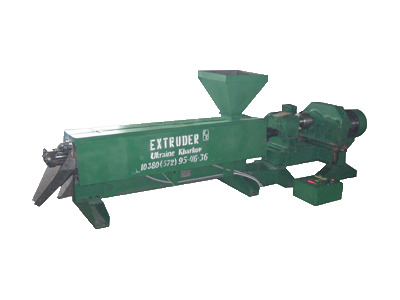 It is designed for production of seed-oil from the seed of oil bearing crops during one raw material pass without its preliminary thermal processing.

Thermal processing of raw materials is performed directly in the press-extruder by heating spirals.

The peculiarity of the construction of press-extruder suggested is the two rolls with working knots fixed on them (the set of screws and pawls) which rotate simultaneously in one way. Such construction gives a possibility to join several technological operations in one body and keep the fixed temperature regime in zones and also easily change working knots of the press depending on the raw material being processed.

Press screw extruder EK-130/2000 is delivered by the manufacturer assembled, adjusted for optimal oil pressing from the crops defined by the Customer. Press screw extruder has to be exploited in closed spaces with the temperature of environment 15-40°С. Thermal processing of raw materials is performed in the press directly.